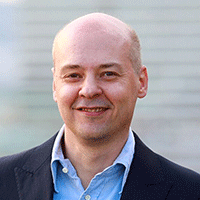 On November 24, the Maison de la Chimie in Paris hosted the annual forum of CB, the French Economic Interest Grouping that defines the operating procedures of the CB card payment scheme. Innovation, cybersecurity and the environment were the three themes highlighted during the day, which brought together payment and retail players.

The present and future of payments

CB is doing well and continues to grow in 2022

The CB 2022 Forum was an opportunity for CB's ebullient CEO Philippe Laulanie to look back on a successful year for CB, which is doing well and has continued its growth in 2022. As Mr. Laulanie proudly pointed out, all the figures are in the green for CB, which represents two thirds of the current spending of the French population. This is a good reason to look forward to the future with confidence, with the launch of the latest CB offers: FAST'R by CB, Open Payment CB and CPACE CB cards.

All this success, this sustained growth over the last six years, does not mean that there have not been a few bumps in the road, which Mr. Laulanie was frank enough to mention. The first problem was the resistance to ‘Open Payment’ , a CB contactless payment system for public transport. Mr. Laulanie would have liked to see a single card that would work throughout the country, but it seems that this dream will not be realized in the near future, due to a lack of agreement between the various stakeholders. The second disappointment is that the card component of the pan-European payment service project, the European Payment Initiative (EPI), has been abandoned. This project will not be carried out via the European Commission, but Mr. Laulanie has not given up on it, promising to build it in another way, by establishing partnerships with other countries.

This day, rich in meetings and debates, was also an opportunity to address the various challenges that the world of payment, commerce, and ultimately the world as a whole will have to face.

The most important of these challenges is sustainable development. CB devoted the entire morning to it, starting with a round table entitled ‘Commerce, electronic payments and sustainable development’. This was an opportunity to talk about the importance of regulations, innovation and also new consumption behaviors, since the idea of the circular economy was mentioned several times. It was also an opportunity to talk about some of the latest achievements of payment and distribution players (digitization of the receipt and of payments, reinvention of the customer journey, organic and recycled cards, etc.). A positive vision swept away immediately afterwards by two powerful speakers whose punch left the audience reeling. Jean-Marc Jancovici first of all, who came to remind us that although it was important to continue to fight against global warming, it was already too late to prevent it, and also to demonstrate via an unstoppable mathematical formula (GDP=Energy=CO2) that we were going to enter an inevitable recession. Couldn't hope come from technology then? Mr. Jancovici shrugs his shoulders when asked about crypto-currency. As for the journalist Guillaume Pitron, who succeeded him on stage and who has been investigating green IT for the past two years, the concept of tech4good could well prove to be utopian. "The virtual is never virtual", he reminds us – "the more virtual, the more material" – before revealing the staggering environmental impact of digital activities.

The second challenge that payment players will have to face is cybersecurity. This challenge was the theme of the second debate entitled ‘The challenges of digital trust’. Cyberthreats were discussed, of course, but it was also an opportunity to talk about national and European projects for digital identity, electronic signatures and customer data confidentiality.

The third challenge was innovation. No debate around this theme but workshops organized by the LAB by CB to highlight the innovative and attractive projects of the finalists of the CB Innovation Awards #2022, from digital inclusion with Payelo, Proxigital and Weem to new phygital experiences with Komet Story and Totem.

Open finance: The contributions of PSD2 and the upcoming PSD3

The PSD2 regulation has profoundly changed the world of banking and payments. Policy expert Dr. Dirk Haubrich, Head of Conduct,...

Together with the European Investment Fund, Nordea is introducing a new range of guaranteed loans for small and medium-sized enterprises...

Accelerate change with Qorus and Huawei at the Mobile World Congress

TD and CanadaVisa will equip international students, temporary workers, and permanent residents with financial education, tools, and resources to help...

Swiss startup Pelt8 is one of the five winners of the fourth edition of the LHOFT Catapult: Kickstarter program. Its...

Aptitude Software, a specialist provider of market-leading subscription management and finance digitalization software solutions, has announced a strategic partnership with...

Here is a selection of news about the financial products and services offered by insurance players in France. A ‘Tour...

Lightyear and Arval join forces on sustainable mobility with the pre-order of 10,000 units of Lightyear 2, Lightyear’s mass-market model....